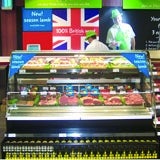 The announcement comes as the big supermarkets revamp their fresh produce ranges to compete for the lucrative market for premium foods.

Asda’s focus on fresh food is part of an overhaul of its three main food labels: budget, mid-tier, and premium.

Last year, Asda re-launched its mid-tier label, calling it “Chosen by You” name in an effort to improve perceptions of the quality its food.

Asda’s push to improve its fresh produce pitches it against Morrisons, which has built its brand around the variety of its fresh produce, and also Sainsbury’s, which last year re-launched its own-label Taste the Difference range to tap into the growth of premium products.

Britain’s second-biggest supermarket behind Tescos said that it now has three times as many quality assurance inspectors operating in its depots and supplier farms compared to a year ago, enabling it to do more quality-control checks in its supply chain.

Asda, the British arm of US retailer Walmart, also said that it has introduced market-leading butchery specifications on all its fresh meat, leading to improvements in taste, tenderness and succulence of key products like sirloin and rump steaks, pork loins and legs of lamb.

Chosen by you represents about 80% of Asda’s own label food sales, equivalent to annual sales of between £8-9bn.