Asics is overhauling its marketing strategy and plotting a big expansion of its store estate as part of its biggest brand shakeup in a quarter of a century.

The Japanese sports brand is best known for its running gear, but wants to broaden its appeal amid wider growth in the market for fashionable sports and outdoor wear.

The relaunch kicked off in London this week – timed to coincide to the start of the athletics World Championships that start this evening (4 August) – with the launch of a new global marketing campaign ‘I Move Me’ by agency Saatchi & Saatchi LA. The platform builds on the founding philosophy of Asics’ founder Kihachiro Onitsuka, who founded the brand 70 years ago in war-torn Japan under the belief that sport could help relieve distress.

Asics’ CMO Paul Miles admits the sports brand has struggled to communicate its purpose effectively in the past. And that while it has a perception for producing high quality technical gear, it has not done as good a job of having an emotional connection with consumers.

“We needed to have a way to talk about all our brands and our philosophy at one time,” he tells Marketing Week. “We don’t see I Move Me as a campaign, it’s an articulation of our mission to get people moving.

Retail is another brand communication channel. That is why we have to open more stores because it is a channel to communicate the brand with our consumer.

“We’ve always been seen as highly technical, with all the gear people need for long-distance running, and people trust us on this and we’re proud of that. Core performance sports will never go away for us because that’s really part of our DNA. But it’s not all we do. We have more product and services we want to deliver and we haven’t really talked about them before.”

While I Move Me is the brand’s global marketing platform, it will have local iterations too. In London, for example, it will take the form of ‘I Move London’, with Edelman creating a campaign for the capital that includes brand films (see below) and a light installation that will tour the capital encouraging people to move.

There will also be social and digital activity as Asics looks to better engage with consumers and create a more emotional connection.

Miles also admits that in the past Asics has been guilty of changing its marketing too often, making it hard to build brand equity. The plan is for I Move Me to run at least until the Tokyo Olympics in 2020, where Asics is a sponsor, “and hopefully beyond”.

The role of retail

The campaign is part of a wider business strategy shift at Asics as it looks to expand its store portfolio amid a focus on direct-to-consumer. This week (on 1 August), it opened a flagship store on Regents Street, designed by Pitch, that brings together its four brands – Asics, lifestyle brand Tiger, Onitsuka Tiger and outdoor brand Haglöfs – for the first time.

It also has plans to open further flagships in major cities including New York and Tokyo, as well as 700 “brand locations” and 100 standalone stores over the next three years.

That might seem like a strange move with Asics’ rivals currently prioritising ecommerce operations. However, Miles describes traditional retail as “super important” to communicating the brand.

“Retail has fundamentally changed, we don’t go to branded stores as much anymore because of ecommerce but retail is not going away,” he says. “Instead it is becoming like a brand experience temple where we can say this is the brand, this is what we believe in, this is really what connects with me; that is the role of retail. 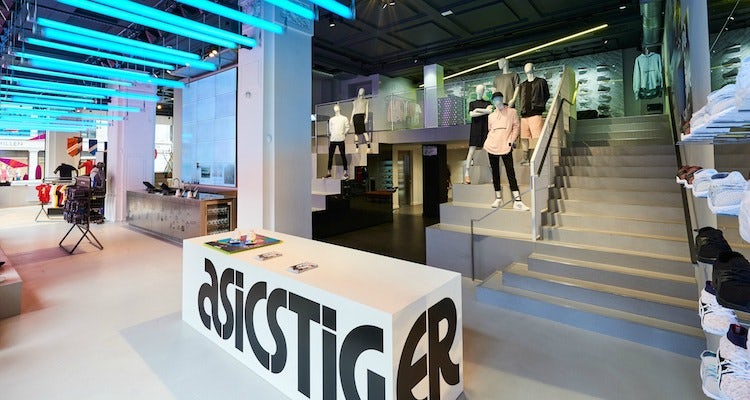 “For me [retail] is another brand communication channel. That is why we have to open more stores because that is a channel to communicate the brand with our consumer. Whether it be online, brick-and-mortar, a social media campaign, all these things to me are just consumer touchpoints.”

Miles has been with Asics for two-and-a-half years, joining from Nissan. He says that while he was brought on board to overhaul marketing, he wasn’t interested in changing a logo or its brand positioning for the sake of it.

“For me, you really have to understand what the core DNA of a brand is because usually, unless a brand is really near the end of the road, it’s about articulation and seeing what the seed or nugget is that is the beauty of the brand,” he explains.

“There is a reason why this brand has existed for 70 years and is a top player in the industry. If we have to articulate things in a clearer way or a fresher way or through a different channel, these are the parts we need to, as marketers, hone in on. Are we talking to the right segment in the right voice, the right way, the right channels? These are the things we have to talk about first before we change things.”

Miles’ role also involves ensuring every expression of the brand is consistent and the experience is seamless. He sits on the board of its digital team and works closely with the team at Runkeeper, a fitness app Asics acquired last year.

He concludes: “Marketing, ecommerce, apps, any consumer touchpoint has to be seamless. Just because they are in a store or using the app it doesn’t matter, it is all one brand experience. I work really closely with the Runkeeper team in terms of content creation, app development, consumer engagement. It’s not just about marketing anymore, it’s an integrated communication experience and it is my role to bring everything together.”

Adidas is focusing on ad spend and a closer relationship with celebrities such as Kanye West as it provides greater details on its strategy through to 2020.