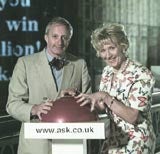 She takes over from Aylin Savkan, who left the internet search company at the start of the year and is now working for 192.com. Savkan had headed Ask’s marketing department since 2001, when Cox was promoted to chief executive (MW October 18, 2001).

Johnson held a number of positions at Levi’s including marketing director for northern Europe. In May last year she took a sabbatical when the jeans manufacturer restructured its European marketing department.

Before joining Levi’s, Johnson worked for Whitbread as marketing manager for Heineken, and as a group product manager at pharmaceuticals company SmithKline Beecham (now GlaxoSmithKline).

The search engine, which claims to handle 40 million searches a month in the UK, relaunched last year with a &£2m television and online campaign created by TBWA/London.

Jeeves the butler also got a makeover and the “ask” button was replaced with one marked “search” (MW September 23, 2004).