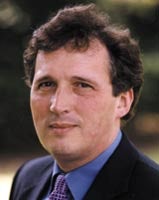 Cox succeeds George Lichter, who is moving back to his native America to become president of Ask Jeeves International.

Cox’s old post has not been filled, as he will continue to oversee sales and marketing. The company already has a head of marketing – Aylin Savkan – and a head of sales. They will be unaffected by the move.

Cox joined Ask Jeeves in March 2000 from the St Ivel Group, where he was marketing director for six years. Prior to that Cox spent eight years at Cadbury Schweppes as head of marketing.

Cox says: “We have a proven management team in place, with a clear vision of how the business can be developed.”

Ask Jeeves is the seventh most-popular website in the UK according to Jupiter MMXI. It is owned in the UK by Ask Jeeves International, Carlton Communications and Granada.

The company spends &£6.7m on its Jeeves the butler advertising, which is created by TBWA/London. Media is through MGM and Media Planning Group.

In May the company launched a &£1m competition, promoted by disgraced MP Neil Hamilton and his wife. The six-week competition, where users had to type in a secret question which was worth &£1m, was never won.