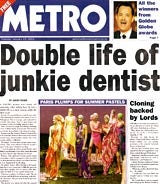 Associated Newspapers is to team up with Guardian Media Group (GMG) to publish a free morning daily newspaper in Manchester, called Metro.

Negotiations have been going on for months between the two publishers, who both launched free morning newspapers in Manchester on the same day in 1999.

Associated was later forced to change the name of its newspaper from Metro North West to News North West after GMG claimed that the title infringed the trademark of its Manchester Metro News, launched as a weekly in 1988.

Under the new deal, which takes effect on February 12, editorial will be provided by Associated and GMG will publish and distribute the paper.

The licensing by GMG of the Metro title to Associated follows similar deals with other media companies such as Trinity Mirror and Regional Independent Media.

Associated is also pursuing plans to publish free evening titles, which will probably take a magazine format, in cities across the country.

Mike Anderson, managing director of Metro, says: “We now have a national newspaper with friends in every urban city. We would like to leverage that for other opportunities and angles.”