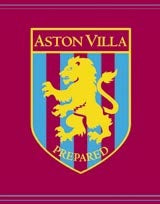 Aston Villa Football Club is looking for a shirt sponsor for next season (2004/2005), in a move which puts into question the club’s decade-long association with MG Rover.

Aston Villa has had an association with the Midlands-based car manufacturer since 1992, although MG Rover only started to sponsor the team shirts two years ago. The deal expires this season.

Industry sources say Aston Villa is searching for a replacement sponsor, although Rover denies it has pulled out of renewal talks. An MG Rover spokesman adds: “The club may just be prospecting.”

Aston Villa commercial director Abdul Rassid refuses to rule out the possibility of a new sponsor for next year but denies that Rover is no longer involved in sponsorship renewal talks. “The shirt sponsorship was for a two-year period that expires this year so we are in discussions at the moment.”

MG Rover slashed its advertising budget in June this year following the resignation of marketing director John Sanders (MW June 26). The company ended its four-year relationship with M&C Saatchi when it handed the advertising account for its CityRover launch to Cogent last month (MW November 13).

Last week Phil Smith joined Aston Villa as marketing director. He was appointed to the post in October following the departure of Kate Linnell (MW October 23).

As the Diary knows well (too much time spent under interrogation by the local gangsters), it can get very cold inside a fridge. So spare a thought for all those packaged goods that are forced to spend almost their entire lives in chillers, huddling together for what little warmth can be gleaned from the fermenting […]

The Co-operative Bank this week published the Ethical Purchasing Index, according to which the sales of goods marketed as suitable for ethical consumers rose 13 per cent in 2002 to £6.9m.

Ofcom, the super media regulator that comes into force at the end of this year, has appointed Colette Bowe as chairman of its consumer panel. She joins from Thames Water.