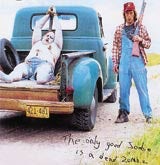 Orr replaces Amanda Farr, who has been on maternity leave since October and plans to return as a part-time consultant.

Prior to joining Atari, Orr spent a year at BMG Records as head of catalogue. Before that he was at HMV for seven years and was promoted from marketing manager to head of marketing in 2001 (MW September 20, 2001). Orr will report to Atari UK managing director Jeremy Wigmore.

Atari is 90 per cent-owned by Infogrames Entertainment, which rebranded as Atari in May 2003. A month later, the company hired Martin Spiess as its first international marketing chief in an attempt to regain its former success and launch an aggressive assault against rivals Electronic Arts and Eidos (MW June 19, 2003).

That same year it fell foul of the Advertising Standards Authority because a press ad for one of its computer games was too violent (MW November 20, 2003).