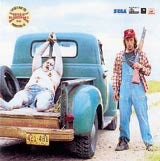 Video gaming brand Atari has fallen foul of the Advertising Standards Authority (ASA) over a press ad exploiting violence in one of its computer games.

The ad features a man holding a shotgun, standing next to a pick-up truck. On the back of the truck is the body of a man with two bullet wounds in his torso and his hands tied above his head. Blood is running from the wounds and from the man’s mouth. The tagline reads: “The only good zombie is a dead zombie.”

The ASA has asked the advertiser to seek guidance from the Committee of Advertising Practice (CAP) Copy Advice team before using similar campaigns in the future.

The advertising watchdog has also objected to a poster for thejuicecompany’s range of smoothie drinks, for making ambiguous use of the words “fruit” and “smoothie” alongside the image of a cross-dresser. According to the ASA, the ad is both offensive and homophobic.

Separately, Imperial Tobacco-owned Rizla cigarette papers has been censured for using the strapline: “Twist and” in a press campaign. The ASA has upheld a complaint from rival Zig Zag, because the campaign alludes to the use of cannabis cigarettes, which are twisted at one end.

The Rizla campaign had been approved by the CAP Copy Advice team before it was rolled out.