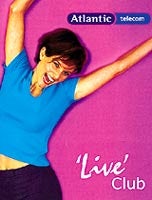 Telecoms operator Atlantic Telecom could make up to 14 marketing staff redundant in a company restructure.

It hopes to relocate the 14-strong marketing team, currently based at its Aberdeen office, to another headquarters in Manchester, in preparation for its sponsorship of the Commonwealth Games, which are to be held in the city in 2002.

But it is unclear whether all members of the marketing team will be willing to move.

Atlantic’s marketing director Amanda Doran is based in the London office along with a number of other marketing staff. It is not known whether the restructuring will also affect them.

The jobs in question are part of a total of 350 redundancies that the company is sanctioning as part of a restructuring programme. It is designed to reflect a shift in focus to providing high-speed Internet services for small businesses.

The largest proportion of the losses will probably come from Atlantic’s residential sales and support groups.

A spokeswoman for Atlantic says: “There will be changes in marketing as part of the restructuring. In the longer term, marketing will be relocated to Manchester. As a sponsor of the Commonwealth Games there is a strong argument for having a bank of staff in that area.”

The restructuring is designed to cut overheads by &£30m this year and to ensure that the company starts producing positive cashflow earlier than analysts’ predicted date of 2004.