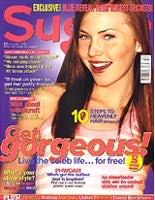 The publishing company has been up for sale since March this year (MW March 8).

According to a spokeswoman for Attic Futura: “Attic Futura is not for sale at the moment. PMP sold part of Pacific Publications, which owns Attic Futura.”

It was rumoured earlier in the year that both BBC Worldwide and H Bauer had put in bids to buy Attic Futura, but that they didn’t offer enough money.

In the UK, the Attic Futura stable includes All About Soap, B, CD:UK and Inside Soap. The Audit Bureau of Circulation figures for the first half of this year showed a decline of 9.6 per cent in Attic Futura’s year-on-year – and 8.5 per cent in period-on-period – circulation.

Attic Futura’s teenage title Sugar has signed an exclusive deal with COI communications to produce a 12-page special supplement dedicated to the subject of teenage pregnancy.

The supplement, produced with the Teen Pregnancy Unit, will be available from November 30.

The Army has sacked Saatchi & Saatchi and put its £7m recruitment advertising account up for pitch. The decision comes just days after the launch of the agency’s “People aren’t easily led” recruitment campaign.

So Marks & Spencer and Apple are among the least likely brands to survive to 2015 (MW November 8). What nonsense. What consistently comes up in any research on the power of brands is their longevity.

Virgin V Shop brand director Brian Waring is leaving his post at the end of this month following the sale of the company’s Our Price stores to Australian retailer Brazin. A spokesman for V Shop confirmed Waring was leaving his current role but would not say whether he was leaving the company, taking a different […]