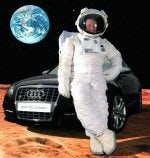 Audi is launching a £3m ad campaign to back a competition offering one person the chance to go into space as part of a campaign to promote its A6 model.

The Volkswagen-owned car marque has teamed up with New Scientist magazine to offer the prize in recognition of the fact the marque has applied for more design patents than NASA in its history.

The “New Scientist Space Adventure in association with Audi” launches tomorrow (Thursday) and is being supported by a £3m advertising campaign, which breaks on February 9.

The most original answer to the question “What is the best patented invention of all time – and why?” will win the trip into space with US company Space Adventures.

Audi has already invested £5m in a television advertising campaign to support the A6 at the end of last year. The space-themed campaign claims that, while NASA has filed 6,509 patents to date, Audi has filed 9,621 to get to the A6.

Audi UK brand communications manager Chris Hawken says: “The A6 is in the highly competitive executive saloon segment. It’s the most sporty model in its class and we are confident of achieving that all-important number one position for the model.”

The winner of the competition will be blasted 62 miles above the Earth into suborbital space. The competition closes on April 30 and the winner will be announced on May 31 in the June 2 issue of New Scientist.

As London gears up to host the 2012 Olympics, potential sponsors are lining up for a chance to be associated with the biggest sporting event in the world. But, as well as the small matter of the £80m price tag, companies will also have to prove their “green” credentials before they are even considered as […]

Chupa Chups, the confectionery manufacturer, has appointed Propaganda to its advertising account, worth up to £1m. The Leeds-based shop won the UK business for the Cremosa and Fruitella brands after a two-way pitch with an undisclosed London agency. Propaganda’s managing director, Mike Phillipson, says: “Winning the business of a leading brand like Chupa Chups means […]

Smart marketers should refrain from over-exuberabce about digital media until they have critically examined four important issues.