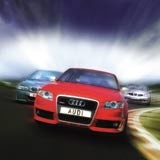 There was a time when Audi was seen as the poor relation of its German rivals BMW and Mercedes-Benz in the premium car sector. But after working hard to improve its image, Audi has trebled its UK sales over the past ten years and this year, for the first time, its first-quarter sales figures surpassed BMW’s.

The marque had its fifth successive record sales year in the UK in 2004 and is ahead of Audi’s American operation in the race for the title of most successful Audi importer. Audi UK chief Kevin Rose has been rewarded for this achievement with a promotion to a senior group marketing role with Volkswagen in Germany (MW last week).

But Audi hasn’t always enjoyed such success. Volkswagen had to plough hundreds of millions of pounds into the brand to make this breakthrough.

Professor Garel Rhys, director of the Institute of Automotive Industry Research, says Audi is beginning to repay this faith.

He attributes Audi’s recent success to the widening of its range. “It was the bravest in some ways because it was the first to come to the smaller segments with premium products,” says Rhys.

“The days when you can have one or two models are gone. You can’t achieve major sales in this way anymore. Audi led the way and got a lot of first mover advantages.”

Recent model additions have included the A4, the new five-door A3 Sportback, the A6 executive saloon and the RS4. They will be followed by the launch of the Q7 sports utility vehicle at the end of the year, which will go up against the BMW X5 and the Mercedes M-Class. Next year will see the much-anticipated replacement for the fashionable TT Coupé.

In 2007, Audi will bring out its first supercar, the Le Mans concept car, which will take it into a different league, competing against the likes of the Porsche 911, the Mercedes SL and the new Jaguar XK.

Because of this increasingly diverse range, the average age of an Audi driver is about ten years younger than the other prestige manufacturers’ customer bases, according to the annual New Car Buyers Survey.

The brand’s average buyer age is 42, and it has more customers under 45 than any other prestige competitor.

Mike Moran, who enjoyed similar sales success during his time as commercial director of Toyota GB, thinks Audi is a credible alternative to BMW and Mercedes.”There’s a rich vein of consumer interest in the styling of the cars at the moment,” he says. “The quality and finish have improved dramatically over the years. I don’t think BMW has done too much wrong – it’s just that Audi is improving and growing.”

Audi UK marketing director Gary Savage says that as well as the quality of Audi’s products, its brand image has improved markedly in recent years.The company has won praise for its advertising, which features the famous “Vorsprung durch technik” strapline, meaning “Advancement through technology”.

Savage claims that 84 per cent of adults in the UK are aware of this phrase, but adds that it is the consistently clear message of the advertising, rather than anything spectacular, that has increased Audi’s desirability.

“I don’t think we’ve done anything remarkable,” says Savage. “We haven’t increased our spend. We’ve just been much more consistent and integrated in the way we communicate the prestige and value of the brand.”

Audi, which has worked with Bartle Bogle Hegarty for the past 22 years, spent &£16.4m on advertising in the UK last year, compared with the &£13m spent by Mercedes and &£26.4m by BMW.

Chris Wood, chairman of branding agency Corporate Edge, believes Audi has undergone a clever transition. He says: “Audi built its brand on the pretty narrow, pretty obvious, but pretty clever concept of German engineering. Over the past ten years it has rounded out its brand and made it richer and fuller.”

However, the reputation for reliability enjoyed by the three German car manufacturers is coming under pressure. According to recent studies by Which?, German premium brands are falling behind their Japanese rivals such as Honda, Hyundai and Toyota. Audi was also hit by negative headlines when it first launched the TT, which led to it having to remodel the car to stop it swerving and swaying when driven.

But these blips do not seem to have had a major impact on Audi’s UK sales, which rose from 25,555 cars in 1995 to 40,000 in 1999. The sharp rises continued into the new millennium, with Audi making the biggest gains among the German premium car manufacturers. It sold 77,039 cars in 2004, according to the Society of Motor Manufacturers and Traders, an increase of almost nine per cent on the previous year.

BMW also experienced healthy sales in 2004 of 102,200, but Mercedes struggled, beset by uncharacteristic problems with reliability. Mercedes’ UK sales, at 81,963, were down more than 12 per cent last year, allowing Audi to considerably narrow the gap between the two.

A Mercedes spokesman says: “Last year was an unusually modest year for us because of model changes. We deliberately ran down volumes of the A-Class and C-Class and they’re our two biggest-selling ranges.

“Audi has said it’s targeting us and that’s quite flattering. It sees us as a benchmark.”

Audi historically enjoys a strong start to the year, according to a spokesman for BMW. But he says a host of new products this year means that BMW is confident about its future.

“We are in a very strong position in the UK market,” says the spokesman. “We have a strong reputation built around years of a strong product offering. Although Audi’s brand has history, it is relatively new in terms of its appeal to its current market.”

At a difficult time for the car industry – MG Rover’s demise being all-too symbolic – Audi has been the envy of its rivals with the sales gains it has made.

But it is not resting on its laurels. Rose has recently stated that he wants to increase sales to between 100,000 and 120,000 by 2008, and that he intends his successor to take charge of a company in the ascendancy.Audi can no longer be considered the poor relation.

It has become one of the brightest stars in the automotive industry and looks like being a genuine competitor to BMW and Mercedes for many years to come.

Travel company Cosmos is conducting a major review of its advertising business, worth &£5.5m, as it plans a major campaign for next year. The company has also put the media buying for five of its brands out to tender and is holding a pitch for the creative account of its biggest brand, Cosmos Holidays. Cosmos […]

As the number of complaints about a KFC ad featuring women singing with their mouths full tops the 1,500 mark, the Advertising Standards Agency (ASA) has begun receiving objections to another ad featuring “bad table-manners”. The ad in question is a Soul-created television commercial for Fanta’s new sugar-free variant, Fanta Z, which broke last week. […]