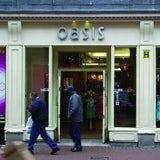 The group’s former chief strategy officer Meg Lustman takes over as MD of Warehouse. Coast is now headed up by the former CEO of LK Bennett Margaret McDonald.

Mike Shearwood, Aurora chief executive, says: “Appointing MDs to each of our brands is a significant milestone and demonstrates we have now moved, earlier than originally planned, into the next stage of our development. Our focus is on growth.”

Shearwood is also reported to be considering a trial of dual-branded Oasis and Coast stores.

The fashion group formed a year and a half ago following the collapse of fashion group Mosaic amid the fall of Icelandic group Baugur.

It has just reported an increase in profit and sales.