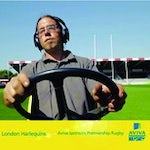 A series of idents lasting five, ten and 15-seconds, created by AMV.BBDO, will be broadcast around Aviva Premiership Rugby coverage on ESPN, Sky Sports and ITV.

The ads are being rolled out today (2 September) and will celebrate the roles of behind-the-scenes individuals, such as the Harlequins head groundsman, Paul Sykes (pictured).

Every team from the Aviva Premiership will have someone representing them in the TV idents. The idea is to present each star of the ad as ’part of the team’.

Aviva signed the four-year sponsorship deal of Premiership Rugby on 7 July, replacing Guinness as the headline sponsor. The deal is worth £20m and will include significant investment in grassroots rugby.