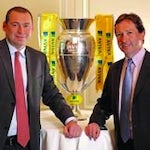 The insurance giant replaces Guinness as the tournament’s headline sponsor. The league will be renamed Aviva Premiership Rugby. As well as title sponsorship, Aviva will also invest in community programmes to boost the sport’s profile.

Mark Hodges, chief executive of Aviva UK, adds: “We’ve invested a lot of time and effort looking for and researching the right sponsorship opportunity and we know that rugby, the fastest-growing participation sport in England, fits absolutely with Aviva. It appeals to many of our customers, intermediary partners and to the other businesses we work with in the UK, so this sponsorship will give us exciting opportunities to connect with them and deliver significant business benefit.

“And through the roll out of a new Aviva national grassroots programme we are proud to be helping develop and inspire the next generation of rugby players to take up the sport.”

Jon Varney, commercial director of Premiership Rugby, adds: “Our partnership with Aviva marks the beginning of a very exciting chapter in the growth and continuing professional development of the club game in England, as we commence new broadcast contracts for the first season of Aviva Premiership Rugby with ESPN, Sky and ITV.

“Premiership Rugby’s values reflect those of Aviva and we share its vision to further strengthen the professional game whilst recognising and supporting the role local communities play in the growth and long term success of the sport.”

The deal, which was negotiated by Aviva with Hill & Knowlton’s Sports Marketing team, begins immediately and will be officially launched closer to the start of the 2010/11 Aviva Premiership Rugby season.

Hill & Knowlton will be responsible for developing and implementing a strategy to activate Aviva’s rugby sponsorship alongside their ongoing sponsorship of UK Athletics.