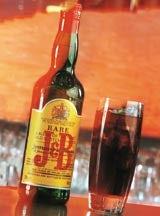 The futures of three senior marketers in Diageo’s whisky division are in doubt, as part of the global drinks giant’s restructuring programme.

Jonathan Driver, who was global brand director for single malts; Richard Watling, who was Scotch whisky director; and Iain Kennedy, who was global brand director for J&B, have all seen their jobs made redundant and are in discussions with Diageo about their future. In a statement, Diageo says: “We are supporting these individuals in finding alternative roles, either within the business or externally.”

The restructure began in September 2004. The main result has been a move to a purely geographical focus, with Diageo effectively dividing its global operations into three regions: North America, Europe and the rest of the world. According to the statement, the restructure has identified J&B as a priority brand, and Nik Keane has been promoted from global brand manager to J&B global brand director. A Diageo spokeswoman stresses that the role is a very different to the one previously occupied by Kennedy.

Diageo has also appointed Nick Carr to global malt whisky and Scotch heritage director and says it plans to drive growth in the single malts sector, and to “align the malts marketing agenda even more closely with Diageo’s Scotch whisky heritage programmes”.

The spokeswoman categorically rejects claims from whisky industry insiders that the three are being made scapegoats for the Cardhu marketing disaster.

In 2003, Diageo provoked criticism from the Scotch whisky industry by launching a blended product under the name Cardhu Pure Malt, to replace its Cardhu Single Malt on the market. Critics claimed it threatened the future of the single malts sector. Diageo backed down and pulled the product 15 months ago (MW March 11, 2004).

vDiageo has agreed to buy Irish whiskey brand Bushmills for about &£200m from Pernod Ricard, if the French company’s &£7.5bn bid for Allied Domecq goes through.