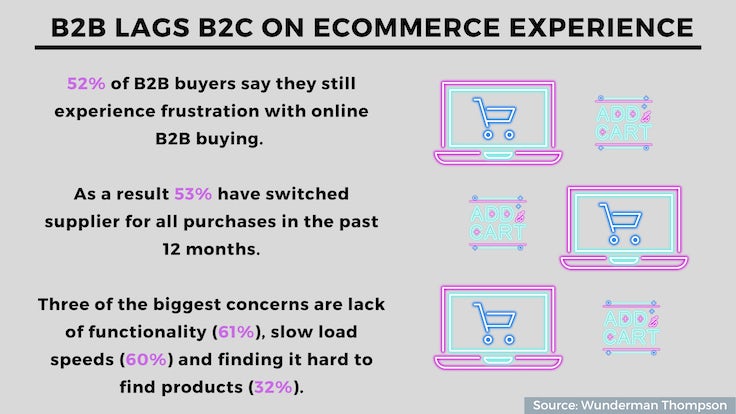 While many businesses accelerated ecommerce plans as a result of the pandemic, one area that is failing to meet expectations is B2B. More than half of B2B buyers (52%) say they still experience frustration with online B2B buying and as a result 53% have switched supplier for all purchases in the past 12 months.

With 90% of buyers expecting the same level of shopping experience when buying on a B2B site as they get on a consumer site, this is becoming more of an issue, especially as half (49%) of all B2B purchases are currently made online.

One of the biggest concerns is the lack of functionality, with 61% of B2B buyers citing this as a problem. Meanwhile, 60% claim load speeds of B2B sites are too slow and a third (32%) say it’s just too hard to find products.

The study of 600 B2B buyers across the UK, US and China also finds 78% of buyers would like a better mobile experience. 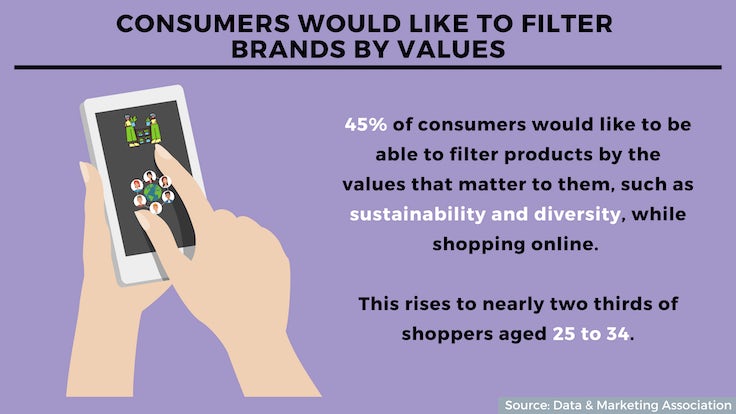 Values-led shopping is increasingly important to shoppers. While the majority of consumers expect brands to offer good value for money, they are increasingly using brand values to decide whether they will try new products.

Nearly half of consumers (45%) would like to be able to filter products by the values that matter to them – such as sustainability and diversity – while shopping online. This rises to nearly two thirds of shoppers aged 25 to 34 who would welcome this feature.

More than a third (37%) of consumers find advertising that represents diversity to be more engaging, with this figure rising among younger, more affluent and London-based consumers.

Diversity in advertising can also help to drive customer acquisition, with nearly one in four consumers claiming they are more likely to buy from brands that do a good job of representing diversity. The sentiment is highest in the 25 to 34 age group (59%), above the youngest group aged 16 to 24 (47%). 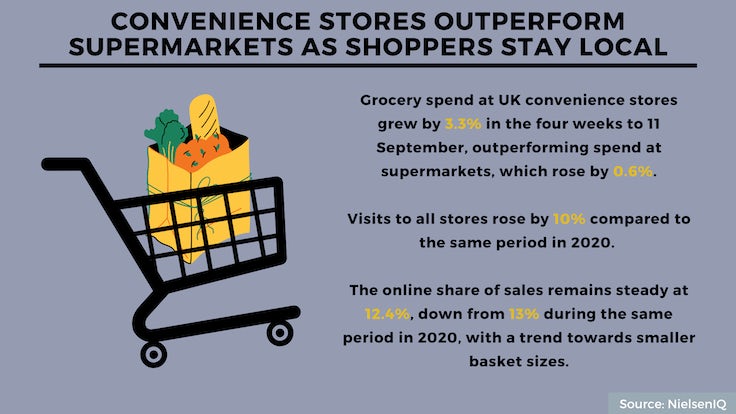 Grocery spend at UK convenience stores grew by 3.3% in the four weeks to 11 September, outperforming spending at supermarkets which rose by 0.6%.

The shift toward convenience store shopping is linked to the “gradual return” of pre-pandemic consumer habits. As workers begin to return to offices and with children back in schools, consumers are choosing to shop more locally and impulsively, as well as “little and more often”.

Shoppers spent £9.8bn at the major supermarkets in the four weeks ending 11 September, some £526m more than was spent during the same period in 2019, indicating robust food retail spend during the end of the third quarter despite hospitality reopening.

All UK supermarkets experienced a jump in new shoppers over the 12 weeks to 11 September. Sales rose 1.4% at Tesco, which continues to gain overall market share, rising to 26.9% from 26.7% a year earlier. Marks & Spencer saw sales increase by 7.4%, while sales surged by 9.2% at Aldi and 15% at Lidl, making it the fastest growing grocer. 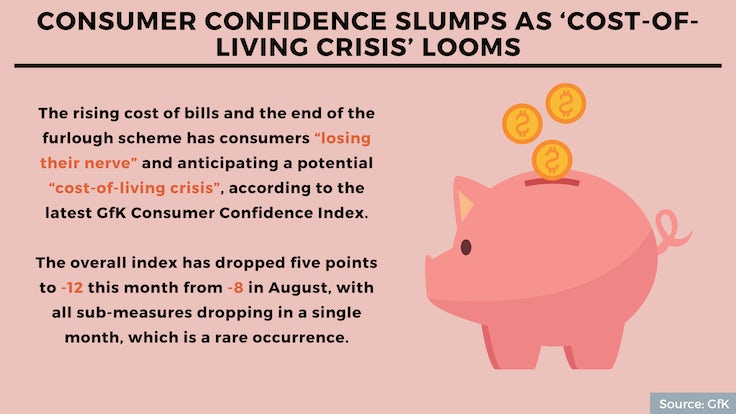 Rising costs of bills and the end of the furlough scheme has consumers “losing their nerve” and anticipating a potential “cost-of-living crisis”, according to the latest GfK Consumer Confidence Index.

The overall index has dropped five points to -12 this month from -8 in August, with all sub-measures dropping in a single month, a rare occurrence.

The plunge is clearly not welcome news, says GfK client strategy director Joe Staton, as marketers target the run-up to Christmas for a shot in the arm to sales targets.

“We don’t often see all sub-measures dropping in a single month but that’s exactly what September is serving up. The biggest fall is in how people see the general economy in the coming 12 months,” Staton tells Marketing Week.

Confidence in the economy over the next 12 months is down month to month from -6 to -16.

While confidence in the economy over the past 12 months is also down from -42 to -43, but this is an improvement from September last year when confidence was at -61.

The downward trend continues to be seen in consumers’ personal financial situations, with confidence dipping in the last 12 months from zero to -4, while the financial outlook over the next 12 months is down from 11 to 5.

Coupling the forward-looking outlooks for the general economy (-6 to -16) and consumer economic situations (11 to 5), Staton notes the future-looking measures show “consumers are losing their nerve” and this is a “worrying” revelation given how the consumer mood has improved throughout 2021.

Meanwhile, the major purchase index for September has dropped from -3 last month to -6, which is a “depressing” finding for retailers that have been hit hard by the pandemic, and are looking to make up for lost ground through the key holiday period.

Gen Z feel there are too many ads on social 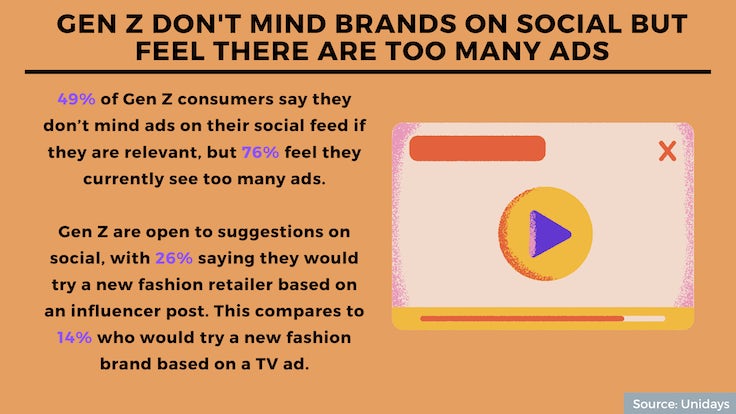 Nearly half of Gen Z consumers (49%) say they don’t mind ads on their social feed if they are relevant, but 76% feel they currently see too many ads.

Two thirds (67%) of Gen Z say they favour brands and retailers that appeal to their social conscience, while more than half (57%) feel brands championing sustainability, equality and diversity are getting it right.