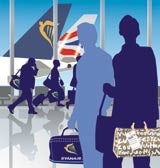 British Airways used to boast it was the world’s favourite airline – and although that has not been the case for a while now, it seems that even the new kids on the block are proving more popular.

And at some point this summer, low-cost carriers Ryanair and easyJet say their monthly passenger numbers will overtake BA’s.

Ryanair’s passenger numbers jumped by 24 per cent to 2.65 million in April; and in May, easyJet carried 2.5 million people, up 21.9 per cent year on year. BA flew 3.02 million passengers in May, almost unchanged year on year.

But BA says that easyJet and Ryanair include “no-shows” and non-paying customers in their figures, something it does not. Furthermore, the number of passengers travelling with franchise partners such as GB Airways and British Mediterranean are not included.

A BA spokesman maintains that the company is not concerned about passenger numbers per se, adding that Ryanair passengers travel an average of 750km, while those flying with BA manage about 3,000km.

“The true measure is profitability and revenue – and on that, they are a tenth the size of us,” says British Airways head of marketing for UK and Ireland Jayne O’Brien.

But with the European no-frills operators continuing to expand their services, BA is reviewing its short-haul operation.

When the budget airlines first took off, BA’s European bottom line nosedived, from break-even to losses of £300m in 2000.

Under the management of chief executive Rod Eddington, BA has now clawed its way back and is breaking even, but it remains embroiled in a dogfight with the low-cost airlines.

The bulk of BA’s marketing budget – which is being increased by five per cent to £60m for the coming year – will be spent bolstering the airline’s presence in the short-haul market. The ba.com website, which is the cornerstone of BA’s lower-cost operation, has been earmarked to take 14 per cent of the budget. A further six per cent will be spent on pushing a “price and value” message for the short-haul operation.

However, BA is also using that increased advertising budget to reinforce its position in the long-haul business class sector by developing Club World, and is running new ads to promote its flat beds.

Most advertising and sponsorship activity for the airline will carry the ba.com Web address and the line “Have you clicked yet?”. It will also focus on cheap online fares, taking on the no-frills carriers at their own game.

“Price is very important in the short-haul leisure sector, but by no means is it the only consideration,” says O’Brien. “It is not about being the cheapest.”

BA’s recent “tall prices campaign”, created by M&C Saatchi, not only focused on price, but also highlighted the service benefits of flying with the airline: arriving at major airports and allowing passengers to choose their seats, for instance.

Goes to the hub, pays for the drinks

BA says these service benefits – which arguably eat into margins – are expected by its core market of business travellers, many of whom use the short-haul flights in conjunction with BA’s lucrative long-haul operation.

However, both easyJet and Ryanair claim that business customers make up about 40 per cent of their passengers.

BA has earmarked its service benefits for a part in its marketing strategy for recovery. BA, which uses agencies M&C Saatchi and Zenith Optimedia, believes that its long-term thinking about marketing and branding gives it an edge over “seat of the pants” operators.

Neither Ryanair nor easyJet retains a creative agency; both do a lot of their work in house and focus on prices.

“Our long-term marketing strategy is the one we have applied for years: drive fares lower, sell the price message and provide good customer service,” says Ryanair sales and marketing manager Sinead Finn. “The lowest fare wins – when you offer the lowest fares, there’s no one else to worry about.”

EasyJet brand and marketing services manager David Meliveo says the company’s distinctive planes double as ads for the brand and adds that easyJet is the best-recognised airline brand in Europe.

Apart from low fares, both Ryanair and easyJet are proud of their records on delays and baggage handling. In the year to March, says Ryanair, 89 per cent of Ryanair flights were on time, 15 per cent more than BA.

And both have plenty of cash to fight any price war with BA: Ryanair has Ã¢âÂ¬1.6bn (£1.1bn), while easyJet is not far behind with a cash balance of more than £500m.

The budget airlines are also both continuing to expand. Ryanair has just placed an order for 140 new aircraft, and hopes to double its annual passenger numbers to 70 million by 2012. It also trying to pick up market share by launching new routes.

However, analysts say that British Airways has done well to come back from the brink under the leadership of Eddington, who will be replaced by former Aer Lingus chief Willie Walsh in September.

JP Morgan airline analyst Chris Avery says that BA’s reaction to the challenge from low-cost carriers should be regarded as “textbook” for other national airlines that feel under threat.

He says that it managed to protect its core business class market, while also learning from low-cost rivals by offering cheap online deals.

“Basically, BA swallowed its pride and accepted that it was not the world’s favourite,” says Avery.

He adds that the internet is now a key battlefield as airlines’ flight offers “leapfrog” each other from month to month.

He also maintains that BA’s disposal of its own low-cost airline, Go – at the time a move derided by many industry experts – was the right course of action.

“Eddington was absolutely right to sell it because it was diverting the core airline’s attention from the low-cost war,” says Avery, who suggests that the only mistake was not to get a better price for it.

The battle for short-haul passengers is a long way from being over and the tussle between BA and the no-frills carriers is likely to spill over into new markets across Europe.

In the US, there are 850 jets flying low-cost routes around the country. The population of the EU is almost double that of the US, yet there are just 350 low-cost planes to service them.

If Ryanair and easyJet can capitalise on that potential, then they truly will come to rival BA in size – and maybe even profitability.v