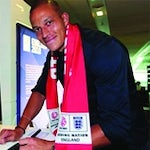 BA is collecting hundreds of its customer’s signatures in order to plaster them on the official England 2018 aircraft that will fly the Bid team to FIFA’s Swiss headquarters in December.

Zamora is the figurehead launching the scheme, which is timed to coincide with this week’s ’Backing the Bid Week’.

Signatures will be collected via an electronic board in BA’s Galleries lounge in Heathrow’s terminal five. Zamora is an official Back the Bid ambassador and recently won his first England cap in the friendly game against Hungary.

Zamora says: “It was my dream to pull on the England shirt, and in 2018 I’ll be dreaming just like the millions of English fans to see the boys lift the World Cup – what better place to do it than England.”

The England debut of Zamora follows a big shake-up of the team by England manager Fabio Capello.

The manager is blooding many new players after the woeful performances of the ’Golden Generation’ during this summer’s World Cup.

England’s bid to host the World Cup was given a boost by encouraging comments made by FIFA president Sepp Blatter regarding the country’s sporting infrastructure.

“The easiest way to organise the World Cup is to go to England,” says Blatter. “Everything is ther there – fans, stadiums, infrastructure – it’s easy.”

Blatter’s comments come as FIFA begins a four day inspection of the English bid this week. England is competing against Russia, the US and joint bids from Spain and Portugal and Holland and Belgium.

BA announced its support of the England World Cup bid back in April by using Gary Lineker to unveil its plane with a football for a nose. The plane is being used for all flights undertaken by England’s World Cup bid team.