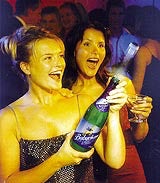 Babycham, the 50-year-old sparkling pear juice that has been nostalgically rediscovered, is being given yet another makeover by its owner, drinks company Matthew Clark.

A Babycham website, featuring a selection of vintage advertising for the brand, goes online next Monday, while packaging has been redesigned to play up the product’s heritage.

According to press reports, Britney Spears demanded Babycham for the UK premiere of her film earlier this year, while Dannii Minogue is understood to have bought a pair of Babycham trainers after a licensing deal with streetwear label Shopgirl saw the launch of a range of Babycham clothing two years ago (MW December 7, 2000).

Babycham was the first drinks brand – and only the second brand – to advertise on commercial TV in the UK, and much of its success in the Fifties and Sixties was due to high-profile ad campaigns, targeting young women who were venturing into pubs on their own for the first time.

A redesign in the early Nineties saw the product in a blue bulb-shaped bottle, and the famous deer was dropped in an attempt to update the image. The revamp proved a failure and was abandoned after only a couple of years.

Matthew Clark is now owned by US group Constellation Brands.