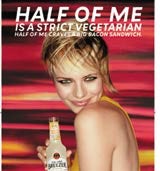 Campbell Doyle Dye (CDD) has created the first burst of advertising for Bacardi-Martini’s diet variant of its Bacardi Breezer range – Half Sugar. The outdoor advertising will target 24- to 35-year-olds and will use the tagline “Half of Me”. The nationwide campaign will go live over the next few weeks.

CDD was appointed to the Bacardi Breezer account earlier this year without a pitch, after the agency took part in the pitch for Bacardi’s £10m Carta Blanca rum brand, which it narrowly lost to Fallon.