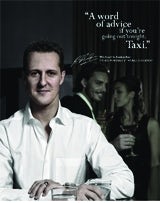 The video was launched on last night’s season episode of Top Gear, in which Bacardi social responsibility ambassador and seven-time Formula One world champion Michael Schumacher was a guest.

The video shows Schumacher illustrating how drinking affects your driving, with viewers encouraged to click through to Bacardi’s Champions Drink Responsibly campaign site.

The campaign launched in April 2008, with the latest push to include online advertising, TV and print activity across 35 markets. 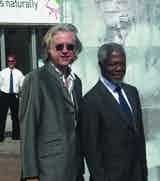 Cannes: A major climate change campaign has been launched at the Cannes Lions advertising festival this morning (June 26) by former secretary general of the United Nations and Live Aid founder Bob Geldof.

The British Retail Consortium has rejected claims from a coalition of health bodies that cut-price alcohol promotions could contribute to a health “crisis”.

If you don’t innovate and push investment during a recession you’re going to fail. Standing still means you’re moving backwards. I know, I know, you’ve heard it all said a hundred times already and read it a hundred more. But as a publishing company with a top media brand in the marketing sector, we lead by example and like to show we are practicing what we preach.