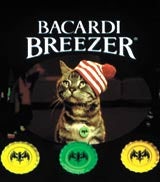 Bacardi-Martini is merging its onand off-trade marketing departments, and has promoted Bruce Ray to the new role of director of trade marketing.

Ray, who was previously on-trade marketing controller, will oversee marketing for the company’s brands, which include Bacardi rum, Martini Vermouth and Bacardi Breezer. He will report to Bacardi-Martini sales director John Beard.

The restructure means that all aboveand below-the-line activity will now be carried out by one department, although the company stresses there will be no changes to its agency arrangements.

The company uses Universal McCann for media planning and buying for all its brands.

Jeremy Paris Jones, who was previously commercial development controller with responsibility for off-trade marketing activity, has been promoted to purchasing controller. His responsibilities will include buying raw materials, and overseeing the manufacture and printing of promotional materials.

Ray says the restructure “makes utter strategic sense” and will enable the company to communicate similar messages to consumers in both the onand off-trade sectors.

To some, Jimmy Young is a doddering, aged DJ, who is past his sell-by date. To others, he is the last bastion of maledom left in a female-dominated world, says Iain Murray

Celebrities are a good crowd-puller at any conference or event, but is a household name on its own enough? Should guest appearances be tailored to suit the industry or organisation that they are addressing?

The latest autumn and winter fashions are in the stores; and not just for people. Well, so the Diary hears. Dog lovers everywhere will be pleased to hear that they need no longer have their style cramped while out walking man’s best friend. A range of trendy leads and collars has been launched by Armitage […]