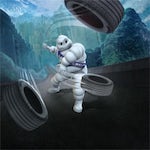 Michelin has embarked on a new global advertising strategy that takes ideas set out by the company’s founders and translates them into modern issues, such as the environment, the recession and use of social media. The new campaign positions the brand’s century-old Michelin Man mascot as the motorists’ problem-solver, who can navigate consumers through complex technology.

The Michelin Man is treated as a guardian of consumer road safety and an environmental crusader with a mission: to help motorists save money on fuel and reduce CO2 emissions. He does this by offering them a Michelin tyre from his own rotund body – a return to something he did in the company’s ads more than a century ago.

The new brand campaign breaks in the UK on 15 March, but has been running in the US since October. On the other side of the Atlantic, the campaign has boosted brand awareness by 62%, helped market share rise 7%, while brand engagement is up 38%. It is the biggest campaign Michelin has ever produced, and a stark shift from previous campaigns.

Michelin head of brand and communication Claire Dorland-Clauzel says this is a strategic move to differentiate Michelin from rival brands. “The communication of our competitors is product oriented, male oriented and uses sharp, dark colours. It is not very customer-focused. But when you look at who is buying tyres, you see that women make more purchases than men – in the US, 80% of tyres are bought by women. So we have looked at our competition’s communication and we have decided to really be different.”

This approach mirrors the one taken by company founders Édouard and André Michelin. The brothers understood the power of brand innovation and created a series of platforms to make the company name recognisable in unconventional ways. These included the Michelin Man character and the self-titled restaurant and travel guides, which helped build a global brand.

Dorland-Clauzel claims: “The longevity and fuel efficiency of our tyres are good for the consumer and the planet. Longevity means you use fewer raw materials in production, and that comes from our research. But we have to explain that and it isn’t easy to do.”

The campaign features a series of taglines, including “Fight fuel costs with a Michelin tyre” and “The right tyre changes everything”. These taglines aim to play on consumers’ growing environmental concerns, while at the same time appealing to the public’s desire to save money. “Michelin Man is an educator, who explains our messages to consumers and delivers the innovative side of our research,” according to Dorland-Clauzel.

She adds: “Even if Michelin tyres cost more, at the end of the life of the tyres you have saved money because of their longevity and fuel efficiency. Effectively, you buy four tyres, but only pay for three.”

The campaign’s messages also provide a neat link to the company’s first foray into social media, an area in which Michelin has pledged to spend 10% of its media budget. Dorland-Clauzel argues this is an important investment to “better explain the world of tyres to consumers”. In the same way that the Michelin guides helped create a talking point for the brand a century ago, the company now needs to use technology for the same purpose.

Even though the talking points of issues like the environment are clear, getting the public talking about the less-than-inspiring subject of tyres is a challenge. Again, the Michelin Man is being presented as the face of the company’s social media networks, capitalising on public affection for the character by letting people talk directly to him. This is similar to Comparethemarket’s tweeting its meerkat character.

On Facebook, the Michelin Man had 3,715 fans at the time of writing, with the character responding to people’s comments and wall posts. On Twitter, he also tweets about his whereabouts at various events, and is happy to answer questions and offer advice about tyres.

The closest tyre brand to Michelin in terms of Facebook participation is Pirelli with 2,174 fans. With exclusive distribution and images of high fashion names such as Kate Moss and Naomi Campbell, the calendar has associated the Pirelli brand with glamour. But it is a niché area, and Michelin is hoping to benefit from the more universal appeal of the Michelin Man, which was named the advertising icon of the century by the Financial Times in 2000.

“People are very passionate about him. All the research we have shows that everywhere in the world, the Michelin Man’s appeal is his friendly character,” suggests Dorland-Clauzel.

Attempts to raise brand awareness will also see the Michelin Man front a new European campaign for Michelin restaurant and travel guides. This tactic is part of a bid to cement the link in the public’s mind that the two businesses are related – a result of the Michelin founders’ idea to promote sales and loyalty towards their tyres. “The Michelin Man won’t be throwing tyres from his body, but it will be similar in style so people will make the connection,” explains Dorland-Clauzel.

She acknowledges that the public is currently failing to make that connection, which is why the next guides to be released will feature more information and advice on Michelin tyres. “In the past few years we have maybe forgotten that these guides have been a tribute to the brand, and their existence was to increase the consideration, awareness and preference of the tyre brand.

“It is our policy now to reaffirm that these guides are an attribute of the brand and we want to reposition and redevelop them to be sure that people know we are the same company.”

“Michelin Man is an educator, who explains our messages to consumers”

This part of the Michelin brand has also entered the digital space – iPhone apps for restaurant guides have been developed, as well as a digital mapping programme for Nokia’s Ovi content and applications platform.

Dorland-Clauzel explains that the company wants to use its heritage to forge a relationship with the customer using modern technology. “Our founders created the Michelin guides mainly to help the tyre industry. Michelin maps and guides give the brand a more emotional side for people to connect with, so are key for our brand. A lot of our competitors envy this, and I would like to continue this story.”

History of the Michelin Man

The Michelin Man was created in 1894, when Édouard Michelin commented to his brother André that a stack of tyres in their display room would look like a man if you added arms and legs. Tyres at the time were a greyish white colour, hence the reason for the Michelin Man’s white colour.

French artist Marius Rossillon – known as O’Galop – was commissioned to create the image, and the first advertisement featuring the Michelin Man depicted him wearing pince-nez spectacles, rings on his fingers and smoking a cigar.

While the Michelin Man’s image began as a reflection of the rich men who bought tyres at that time, he was altered as the automotive market developed – the rings, cigar and spectacles were dropped and he became rounder and softer looking. In 1908, he had his own newspaper column, ghost written by celebrated French food writer Maurice Edmond Sailland, who used the pen name Curnonsky, but signed by Bibendum – the name the Michelin Man had come to be known as in France.

He was slimmed down for his 100th anniversary in 1998 to reflect the look of smaller, more modern car tyres, but he wasn’t used in advertising again until 2007.

The original Michelin maps produced were the first in France. The company was also instrumental in petitioning the French Government to erect the first street signs, and provided the first form of social welfare in France, in the form of housing and healthcare for its employees.

When the Michelin guides became an established source of travel information, customers could write to Michelin to request directions for a particular journey. Michelin would post a letter back containing an itinerary with restaurant and hotel suggestions.

Besides the use of the Michelin Man and its guides to promote brand awareness, Édouard and André Michelin used other unconventional marketing tools. One early tyre featured a series of Ms in its tread, which left a track of the letters when the car moved.