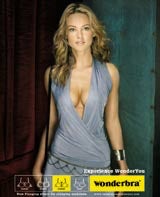 Playtex UK marketing director Herve Bailly has been promoted to global brand director for the Playtex and Wonderbra lingerie brands.

Bailly, who last year spearheaded a revamp of the lingerie manufacturer’s iconic Wonderbra brand, will be based at the Paris headquarters of parent company Dim Branded Apparel (DBA). He will be responsible for the marketing, design and research of both brands.

Last year he appointed the Paris office of Publicis to the &£7m task of reviving Playtex’s Wonderbra range, after incumbent Euro RSCG declined to repitch. Advertising, which broke in October last year, used images of fully clad models as Bailly tried to show that Wonderbra was about more than just cleavage (MW 29 September). He rounded on “sexist” competitors, who he said were marketing to men and not their customers, following the relaunch (MW 6 October).

It is not known who will replace Bailly as Playtex UK marketing director. An insider close to the company says there is likely to be a reshuffle across marketing functions following the acquisition of DBA by private investment firm Sun Capital Partners last month. DBA was created after Sara Lee completed the $118m (&£67.3m) sale of its European branded apparel business in early February. Brands include Dim, Playtex, Lovable, Gossard, Berlie and Princesa.