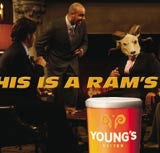 Banc has created a £1m outdoor campaign for Young’s Bitter, using the brewery’s iconic ram emblem. The Ram’s World campaign will break in mid-September. The ads will aim to make Young’s Bitter appeal more to younger consumers as a ‘real man’s drink’. The various advertising executions will feature the ram’s head on a human figure. Media strategy is through Monkey Communications. As part of the repositioning of its bitter brand, Young’s launched a 660ml Young’s Bitter bottle in the off-trade sector in June. Starting in October, the brewery will also be relaunching its 500ml bottled beer range, including Young’s Bitter, Special London Ale and Young’s Champion.