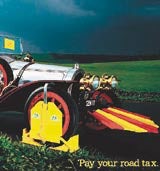 The Diary never had much faith in the tabloids’ crusade against Government-inspired vendetta against motorists: indeed, the very title “traffic warden” implies someone who looks after cars.

This view was threatened, however, when one Marc Catchpole pointed out a flaw in the DVLA’s latest ad campaign, which shows Chitty Chitty Bang Bang being clamped for non-payment of Road Tax.

Fair enough, you say: equality before the law and all that. But, as the DVLA’s own website reveals, Chitty was registered in 1967. And is thus exempt from tax, as are all cars registered before Jan 1, 1973.

A DVLA spokesman, with a weary tone that suggests he’s heard this one before, explains that all vehicles must be licensed annually, whether tax-exempt or not, to prove their roadworthiness. The Diary’s faith is restored. Why, at this very moment a traffic warden appears to be minding the Diary’s Rolls, parked on that zebra crossing…