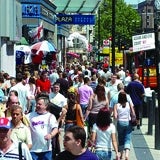 Sales increased in April 5.2% after a 3.5% fall in March, according to the latest figures from the British Retail Consortium.

Food sales returned to growth increasing 2.1% in April and outperforming non-food sales, which reported a 1.3% fall.

Stephen Robertson, director general of the British Retail Consortium, says: “These sales figures are a relief after the dire sales falls we saw in March but they are not the full picture. Considered together, the results for March and April largely cancel each other out and the overall trend is flat. The underlying pressures on the retail sector of climbing costs and depressed consumer spending will be problems for many months to come.”

The BRC and Google launched the first Online Retail Monitor last month designed to measure the growth of online retail searches to compare the performance of pure-play and multi-channel retailers.