Amid all the extreme turbulence that has shaken the financial industry in recent months, there’s one word that has appeared in most of the coverage of the subject: panic.

Except that, according to a new research study, they aren’t. Or not yet, anyway. The study was commissioned by specialist financial brand and communications agency Tangible Financial, and carried out by Q2 Research on the last weekend of September.

Nearly 80% of the sample, which was composed of 600 ABC1 adults with savings accounts/investments by e-Rewards, claimed to be making the effort to keep abreast of developments. Only 6% said that they are “sticking their heads in the sand and hoping everything will be all right.”

That doesn’t necessarily mean they’re understanding everything they’re hearing, with 28% admitting that they “don’t really understand it” – a figure that might slightly concern credit-crunch media star and BBC business editor Robert Peston.

But still, they’re understanding enough to feel that they want to take some generally sensible and appropriate action. One of the research’s most surprising findings is that only 28% of respondents claimed to have taken “no action” as a result of the crisis, with the remaining 72% all claiming to have done something, albeit with many reducing their everyday expenditure, rather than moving their money around.

Nearly one in five of this relatively upmarket sample had divided savings and spread them across more accounts in order to be better protected by the Government’s savings guarantee which, of course, is capped at £50,000. In truth, this is a slightly puzzling finding since, according to the Government’s figures, only 3% of savers had deposits of more than £5,000. And 14% said that they had moved money into “safer accounts” – presumably including the two institutions offering unlimited investor protection, Northern Rock and National Savings & Investments.

Meanwhile, financial advisers will not be pleased to hear that only 8% claim to have taken advice as a result of the crisis. Advisers, seeking to counter criticisms that they are, in fact, hit-and-run, commission-driven sales people, are always keen to paint a picture of close, continuing, trusted relationships with their clients. The research suggests otherwise: if you don’t call a trusted adviser at a time like this, when do you? Perhaps the most important findings in the research were those to do with respondents’ levels of trust in financial institutions, and their own personal level of anxiety. In both of these areas, it must be said, it seems that the British stiff upper lip was still much in evidence. Only an extraordinarily modest 6% claimed to have “stopped trusting the banks,” although a further 21% admitted that their trust in banks was reduced: considering that, at the time, most UK banks were on the point of collapse and the Brown bail-out plan had not been announced, this is an extremely unpanicky response.

Similarly, only 1% of respondents admitted to being “terrified” that they were going to lose all their money, with nearly 60% claiming “no concerns” or only “minor concerns”. Some 41% admitted to “serious concerns” or to “some concerns”.

Again, considering how bleak the outlook actually was over that weekend, this is a surprisingly level-headed response. Some may suspect that it reflects complacency and ignorance, but in fact the research as a whole suggests a well-informed and thoughtful sample who, for whatever reason, tended not to believe that they would pay a personal price for the troubles.

Looking through the findings as a whole, one is reminded of an expression that has recently become popular, especially in the world of the internet – “the wisdom of crowds”. Commentators seeking to explain why large groups of people, even if not particularly expert, are more likely to come to the right answer to a question than a single “expert” like to use the example of Who Wants To Be A Millionaire. When a contestant asks the audience, the answer given is about 99% likely to be right. When a contestant phones a friend, chosen for their expertise on quiz subjects, the figure falls to about 70%.

The financial industry has a bad habit of maintaining a somewhat dismissive attitude towards its customers, believing that they don’t understand and are prone to stupid and irrational behaviour. This small piece of research suggests that perhaps the crowd is wiser than the financial world likes to recognise. 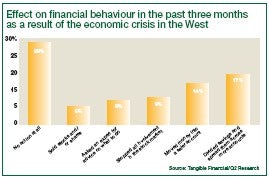 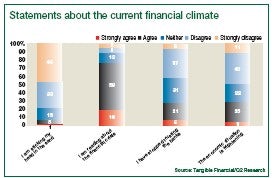 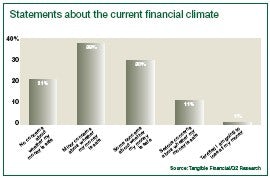