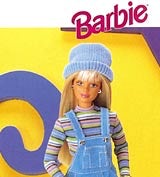 Mattel has furthered its strategy of turning Barbie into a multimedia brand by signing a programming deal with children’s television station Nickelodeon which will see the doll star in her own soap opera.

The agreement gives Barbie her first animated TV show, called Barbie Zone. It will take the form of a 24-episode storyline, with each episode repeated every day at 5pm for a week.

The first Barbie Zone airs on July 1 and the series will run for three months.

The move follows last year’s successful translation of Barbie into a best-selling video, titled Barbie in the Nutcracker, which was accompanied by a sponsorship of the English National Ballet.

This autumn sees a second video launch, Rapunzel Barbie. Both videos have been closely tied to special-edition Barbie dolls.

Nickelodeon, which is available to cable and satellite TV subscribers, claims to be the most popular station in the UK among girls aged four- to nine-year-olds. The Barbie Zone will use actual Barbie dolls set against an animated background.

Mattel has worked with Nickelodeon before, on projects such as a Barbie Weekend. However, while these involved close marketing tie-ups, they stopped short of a bespoke animation.

A Mattel UK spokeswoman says: “The joy of Barbie is that she can continually evolve. That’s why Barbie has lasted this long.”

Barbie sales were up strongly in the UK last year, fuelled by the Nutcracker doll and video, although they have been fairly static in the US in recent years.