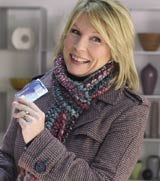 Barclays has promoted its head of card and branch marketing Gary Twelvetree to Barclaycard director of communication, brand and advertising. It is a newly created position.

Twelvetree will head the Barclaycard marketing team as well as take responsibility for the brand’s identity, communications and marketing campaigns. Twelvetree reports to Keith Coulter, the UK managing director for cards and loans.

Twelvetree joined the high street bank from EMAP in May 2002, taking on the role of head of campaign management for group projects. At EMAP he was marketing manager for celebrity magazine Heat.

Barclaycard is still searching for a replacement for head of brand Mike Hoban, who was poached by Scottish Widows as director of customer and brand (MW 18 August, 2005). Twelvetree will oversee the appointment.

The campaign, which launched last July, was created by Bartle Bogle Hegarty (BBH).

Barclaycard’s media account is up for pitch as part of a wider Barclay Group review. Incumbent Starcom is repitching for the business.