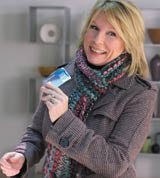 Three Bartle Bogle Hegarty-created 40-second ads will air on television later this month. It will be the Barclays-owned card company’s first TV work since the Aniston spots were broadcast in November. The ads will be supported by a two-month national 48-sheet and 96-sheet poster campaign.

It signals a move back to the “classic” humorous Barclaycard ads, which starred British personalities such as Rowan Atkinson. “This is a classic British brand,” says head of brand Mike Hoban. “We wanted to get back to the high-quality, expensive-feeling, international location advertising that we are famous for.”

Each ad features a Barclaycard benefit, such as insurance, card loss and replacement and internet shopping. The ads, which cost about £1m to make and were shot in Argentina, Tokyo and London, show a split-personality Saunders battling between her calm and stressed sides as she encounters card-related problems.

It follows Barclaycard’s decision to pull out of loyalty reward card scheme Nectar, citing a desire to return to its “peace of mind” ethos for customers through back-up services, particularly while travelling. The company will instead offer travel insurance.

Aniston had been chosen to front BBH’s first campaign for Barclaycard since it won the account from DDB London in October 2003, in order to attract female customers.

The change in positioning is one of the first tangible signs of Barclays marketing director Jim Hytner’s straight-talking approach. After joining from ITV in October, he made no secret of his distaste for the Barclays’ “fluent in finance” ads, also created by BBH and starring Gary Oldman and Donald Sutherland.