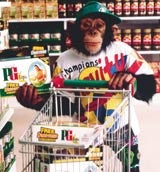 The chimps were the clear winners with 19 per cent of the votes, followed by Barclaycard’s bumbling spy Richard Latham in second place (11 per cent). Monkey, who fronted ill-fated ITV Digital’s campaign, took third position (ten per cent). More than 1,000 people took part in the survey.

Other characters that did well include the Oxo family, Howard Brown from the Halifax ads and the Tetley Tea folk.

Both the tea folk and the PG Tips chimps were axed last year in favour of more modern advertising (MW December 6, 2001). The chimps have been replaced by the plasticine creations the T-Birds, while Tetley has tried to reposition itself around the health benefits of drinking tea.

Flat Eric, the puppet that launched Levi’s Sta-Prest jeans, came in last – a statistic which reflects Levi’s decision to kill him off in 1999.

The results come as Barclaycard’s Latham character makes the leap to feature film format as Johnny English. This is believed to be the first time a character created for an ad has been moved into film. The movie, starring Rowan Atkinson, who also fronted the ads, is released on April 11 (Friday). The poll also found that the public would most like to see the PG Tips chimps follow Barclaycard’s character into movies.