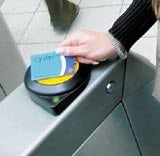 Banking giants Barclays and Royal Bank of Scotland are among the names hoping to partner Transport for London (TfL) in transforming the Oyster travel smartcard into a “digital wallet” that can be used to make payments for small purchases.

The financial services companies are two of the seven organisations and consortia that have made TfL’s Oyster e-money shortlist. Also included are telecoms companies Hutchison 3G and Ericsson, and web-based payment organisation PayPal. Trials with the successful backer could begin later this year.

TfL unveiled its plans for an extended Oyster scheme earlier this year (MW March 10). It aims to transform Oyster from a travel smartcard to one able to handle low-value payments for goods and services at newsagents, parking machines, fast-food and other retail outlets. The Oyster card already has the largest smartcard customer base in the UK, with 2.2 million users.

Jay Walder, TfL managing director of finance and planning, says the use of contactless smart cards has been growing around the world. Hong Kong and Japan have similar schemes, while trials are taking place in the US .

Walder adds: “Extending Oyster to include low-value payments is a natural progression which will make the smartcard even more convenient.” It is also hoped the scheme will generate additional money for London’s transport network.

The full shortlist comprises RBS; Barclays; PayPal; alphyra; a consortium made up of BBVA, Accenture, MTR and Octopus; EDS and bid partner JP Morgan; and a group made up of telecoms giants Ericsson, Hutchison 3G with Eurconex, Nucleus and Dexit.