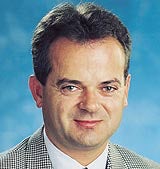 A spokeswoman says: “Evans has spent more than five years as marketing director at Powergen, and has now decided that he is ready for a new role within the group. Both Evans and Scagell are currently in discussions with Eon regarding senior management roles.”

Parmenter, who will report to managing director Nick Horler, was responsible for Barclaycard’s tie-up with the Premiership. He recently moved to take up a new marketing role – as chief operating officer of group marketing – within the Barclays group (MW August 22).