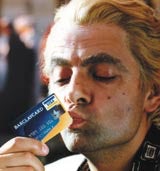 EHS Brann’s work on the Monument credit card will start with a campaign targeting students to run in universities nationwide. This will be followed by a direct mail and door-drop campaign. EHS Brann will also be responsible for developing the telephone service and introducing an online facility.

EHS Brann has worked for Barclays since January 2002. The majority of its work for the bank is on personal finance services, which covers retail banking, including Openplan. The agency has also worked on Barclays’ business banking and commercial lending products.

EHS Brann is one of six agencies that handle all of Barclays’ and Barclaycard’s below-the-line requirements. The other agencies are DMP, Fox Murphy, McCann-Erickson, Tequila and The Forward Group.

Earlier this month, Barclays consumer finance director Frederic Nze said the bank was cutting back on direct mail, claiming it has not been as effective as other forms of marketing. “We are the only industry that alienates customers with our direct mail,” he said (MW July 3).