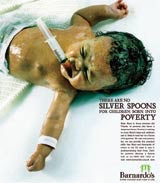 Children’s charity Barnardo’s is launching a shock press and radio campaign to raise awareness of child poverty. Entitled ‘Silver Spoons’, the campaign has been created by Bartle Bogle Hegarty and aims to put pressure on the Government to do more to remove children in the UK from poverty as well as solicit donations. Barnardo’s says the UK has one of the highest levels of child poverty in western Europe, and that 86 per cent of people are unaware that one in three children in the UK lives in poverty. Barnardo’s director of marketing and communications Andrew Nebel says: ‘We believe that images need to be thought provoking if we are to make people aware that poverty is the biggest threat to a child’s future.’ Media is handled by John Ayling &amp; Associates.