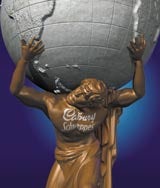 For chocolate lovers, Cadbury’s Dairy Milk falls into the sheer indulgence category. However, while the product is recognised as the quintessential silky milk chocolate brand in the UK, owner Cadbury Schweppes is finding the path to becoming a global player far from smooth.

The company is struggling to establish itself as a global enterprise bursting with “power brands” to compete with heavyweight giants such as NestlÃ© and Masterfoods.

In March this year, Cadbury bought the Adams confectionery business, owner of Halls lozenges and Trident sugar-free gum, from Pfizer for £2.6bn (MW December 19, 2002). This allowed it to leapfrog confectionery market leaders NestlÃ© Rowntree and Mars to take pole position in the global market. As a result of the acquisition, it is now number two in the chewing gum market behind Wrigley.

However, unlike many global players, the Birmingham-based company, which last year enjoyed 20 per cent of the UK sugar confectionery market by value with retail sales of £336m (Mintel), is planning to increase its focus on regional and local brands.

The move forms part of its Fuel for Growth plan, unveiled last week by chief executive Todd Stitzer (MW last week). The ambitious Fuel for Growth cost-reduction programme is designed to provide funds to increase investment in marketing and innovation.

Stitzer, an American and the first non-Briton to run the business, is also planning to cull 5,500 jobs globally and shut down a fifth of the factories in an effort to save £400m a year.

Industry experts wonder whether Cadbury’s move to invest in local and regional brands is an admission of defeat for the company’s global dreams. One rival marketer says: “Cadbury’s culture as a former family-run business has meant that it has always been conservative and slow to catch up on market trends.”

He adds: “The past couple of years have been wasted on acquiring businesses outside its core area of confectionery, so it is being forced to go back to the basics of investing in its existing portfolio in different countries rather than promoting global brands. Its only truly international brand is Dairy Milk.”

Cadbury’s rivals have more than one brand competing in the global market – NestlÃ© has Kit Kat and Smarties; Mars owns the Snickers and M&Ms brands; and Ferrero has Kinder and Tic Tac.

Williams de Broe consumer product analyst David Hallam says: “Cadbury is a very British brand, but Britishness is not a great selling point in itself. The acquisition of Adams provides an opportunity for Cadbury to compete on a level footing with other international giants.”

The company’s expensive acquisitions during recent years are a mixed bag, which don’t naturally fit with its core brands. In 2001 it bought Orangina and other soft drink brands from Pernod Ricard and frozen drinks company Slush Puppie. Previously it has bought Snapple, Dr Pepper and 7UP.

While soft drink sales in the US account for 31 per cent of Cadbury’s turnover and half its operating profits, reports suggest that the carbonates have been struggling as health-conscious customers switch to drinks such as mineral water. Cadbury’s soft drinks brands are not marketed by the company in the UK because of a non- competition agreement it has with Coca-Cola.

Last year Cadbury’s dream of breaking into the American market melted away after its long-coveted takeover target, Hershey Foods, withdrew. The trust which controls the maker of America’s most popular chocolate bar voted to terminate the sale. Analysts say that chewing gum rival Wrigley also had an £8bn bid for Hershey turned down by the trust.

Cadbury’s retrenchment is recognised as a realistic strategy by some observers. “Cadbury clearly made a mistake when it ventured into soft drinks against the might of Coca-Cola and Pepsi. But now it is being honest about its business and its potential, and is trying to leverage its strengths in the various markets where it is dominant,” says Rob Rees, the former marketing director of Campbell Soup.

Although Cadbury is now the world’s largest confectionery manufacturer, it owes the majority of its sales to its strength in Britain and former Commonwealth countries, such as India. In the US, it is hindered by a long-standing agreement with Hershey, which makes most Cadbury products under licence.

On the right track

One City analyst, who is pleased with the company’s recent announcement, says: “Cadbury is seen as a multi-regional and not a multi-national player. It has had ambitions to be an international company for a while, which is the reason for the recent spate of acquisitions, and this has been a very costly affair. But now it seems to be putting its house in order. It has strong local brands and is playing to its regional strengths.”

Reactions on the stock market have been far from positive for Cadbury in the recent past, with its shares losing value because analysts believed the recent acquisitions were too expensive.

Fuel for Growth should give the company the resources to undertake more new product roll-out, and plans include the launch of a low-sugar variant of Dairy Milk chocolate to reflect consumers’ interest in healthier products.

The low-sugar product follows similar plans announced by NestlÃ© last month and, just as pertinently, the widespread condemnation by health watchdogs of Cadbury’s recently launched “Get Active” scheme to persuade children to buy chocolate bars in exchange for free sports equipment for their schools.

Another City analyst explains; “The problem with Cadbury is that it has always been known for its sweet milky chocolate, so new products which are neither sweet nor milky could be seen as a stretch too far. But not to have introduced a chocolate-coated snack bar or a low-sugar variant in the past five years shows how inactive it has been in new product development.”

Cadbury became one of the most recognised brands in Britain with the introduction of the Dairy Milk bar in 1905, and many of its products date back to the early part of the last century and taste virtually identical to when they were first made. Milk Tray, as we know it today, was unveiled in 1915. Fry’s Chocolate Cream and Turkish Delight were introduced in 1919. The Flake made its debut in 1920. Fruit and Nut arrived in 1928, with Crunchie reaching the shelves a year later.

The chief executive of Food for Britain David McNair says: “Brands like Dairy Milk might not be truly global, but have a global scale. The sales and profits are driven by the fact that it is dominant in certain very large markets. Cadbury seems to be attacking each of the markets separately, by attempting to first build the regional blocks then competing on a global level.”

Cadbury is not the first British company to find it tough cracking the US market. Retailers such as Marks &amp; Spencer, Boots and WH Smith have had little or no luck. Another example, United Biscuits (UB) – which recently appointed former Bulmers group marketing director Jon Eggleton to be its new marketing chief (MW last week) – is a classic case of thwarted global ambitions. It serves as a warning to Cadbury Schweppes.

UB was formed in 1948 following the merger of two UK biscuit makers – McVitie &amp; Price and MacFarlane Lang. By the Seventies the company had swallowed a raft of smaller players and owned more than half of the UK biscuit market by volume.

In 1974 it made its biggest geographic leap and acquired Keebler, a US cookie and cracker maker. Further diversifying, it then acquired the Wimpy hamburger chain and also moved into frozen foods. In 1995, it was forced to sell off the loss-making Keebler and then hang a “For Sale” sign outside its doors. It was taken over by a group of venture capitalists in 2000.

Managing director Will Carter agrees that UB overstretched itself. “The company is very different to what it was in the Seventies and Eighties. UB UK is now focused on the existing geographies in western Europe and our existing brand portfolio. We haven’t launched new brands, but we have stretched our existing portfolio into new consumer opportunities,” says Carter. The company’s brand portfolio includes McVitie’s, Jaffa Cakes, HobNobs and KP Snacks.

Critics say that as a result of being owned by venture capitalists the company is seen more as a financial instrument focusing on balance sheets rather than brand equities. Carter rubbishes the criticism and says that the company has increased investment on brands and marketing “substantially” since going private three years ago. Its roll-out of new product development includes the McV a:m snack range introduced this summer, and Pepperami-flavoured Mini Cheddars.

Carter says that UB UK is in no hurry to expand internationally, but its strategy is similar to that of Cadbury – investment behind country-specific brands to suit the needs of regional markets.

But unlike UB UK, the chocolate and soft drink manufacturer is not going to abandon its global ambitions. Fuel for Growth may contain a number of surprises for all Cadbury watchers – including a rumoured demerger of its soft drinks business from its confectionery and gum divisions.