Walmart is sprucing up its website by making it look less like Walmart in a bid to appeal to higher-end brands.

The upgraded Walmart.com will be rolled out next month and feature a more personalized homepage where shoppers will see top-selling items based on their locations.

Consumers will also see a profile of their local store which tells them whether that store has online grocery or easy recorder – which lists your purchases made in-store.

Walmart executives say the declutter and redesign of the website will help the site appeal to higher-end brands and encourage shoppers to browse more products as it battles it out with the likes of online retail giant Amazon.

According to reports, Walmart’s ecommerce businesses accounts for 3.6% of its US sales while the website has about 100 million unique monthly visitors.

It’s safe to say KFC Hong Kong is fired up. And in a good way.

Some print ads are worth a second glance and that rings true for KFC Hong Kong’s latest campaign, which replaces fire with its flaming fried chicken.

The series of adverts, created by Ogilvy Hong Kong, includes a space shuttle taking off and leaving a fried chicken cloud behind it, a rocket powered race car and the Power Rangers posing in front of an explosion of flaming fired chicken.

Jamie Oliver’s Australian restaurant chain has been place into voluntary administration while selling five of its branches – in Sydney, Perth, Brisbane, Adelaide and Parramatta – to restaurant group Hallmark. They will remain open under their new owners.

The move comes just months after UK-based Jamie’s Italian was forced to enter a company voluntary agreement where 12 of its 37 sites were closed down resulting in the loss of more than 450 jobs.

Ice-cream brand Baskin-Robbins’ latest campaign embraces GIF and meme culture while using a popular slogan among teens, as it looks to appeal to a younger audience.

The campaign titled ‘Baskin-Robbins Got Me Like’ aims to garner consumers’ attention and get people talking about the brand in a different way.

In collaboration with content studio Psyop the ice-cream company produced more than 50 animations and images in a bid to represent how it wants a younger audience to see Baskin-Robbins. The animations include a twerking ice-cream cone and a rotund dancing man.

“Our new campaign does a great job of translating the joy our customers feel when they visit our shops into our advertising in a way that is fresh and relevant for today’s consumer. The joyful spirit of the work is contagious, and we feel it truly celebrates all of the delicious ways guests can enjoy our premium ice cream flavours in-store,” says Dave Nagel, senior director of consumer engagement for Baskin-Robbins.

The ads will appear across TV networks including Comedy Central, AMC and BET. While its digital content will run on social media networks such as Snapchat, Instagram, Tinder and Spotify.

US delivery app Postmates has unveiled its minimalist out-of-home ad campaign, aimed at targeting New Yorkers who might want a late night vegan feast or meatballs delivered to the office.

Postmates’ director of brand marketing Lizz Niemeyer says bringing the campaign to New York has been “very important for Postmates as it’s a more crowded delivery market where we have a lot of opportunity to grow”.

Postmates says it can deliver the consumer anything from anywhere – including food, groceries and alcohol – with its latest campaign designed to highlight the fact that it can cater to all New Yorkers, no matter their varied needs.

“New Yorkers are picky, and our internal research shows that New York Postmates users are even pickier,” said Niemeyer.

“They aren’t ordering generic burgers; they’re ordering Shake Shack, and, in fact, one in every two burgers we deliver in New York is from Shake Shack. Our partners are a critical part of the Postmates experience, so it felt natural to include them in a campaign for this market.”

Postmates – similar to Deliveroo or Just Eat – has teamed up with six companies including: Halal Guys, Milk Bar, Shake Shack, Tacombi and The Meatball Shop.

The minimalist ads appear on billboards scattered across the city, one reading: ‘When you’re so hungry, you’ll eat anything except meat, cheese, milk, eggs and hundreds of other options. Vegan food. We get it’. 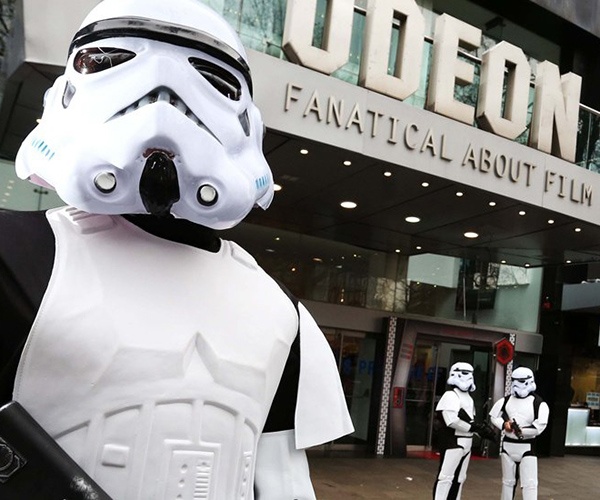 Carol Welch, Odeon’s managing director for the UK and Ireland and a former marketer, explains why the UK’s largest cinema chain is going back to its roots to rejuvenate the industry and accelerate growth.