Currently charities fall under the same cold-calling regulations as commercial businesses, and householders can opt out of unsolicited sales calls through the Telephone Preference System.

However, charity telemarketing agency Relationship Marketing is calling on fundraisers to join its effort to get the ten-year-old rules on charity cold-calling re-examined.

Chief executive Hugh McGraw has written a white paper setting out why the charity sector has been labouring under a “miscarriage of justice” over the past ten years, after a promise of special treatment by government was shelved by policy makers.

The then Department of Trade and Industry originally recommended people who register on the Telephone Preference System should be offered the option to “opt back in” for charity fundraising-related calls, according to McGraw. This area is now handled by the Department for Business, Innovation and Skills (BIS).

However the recommendation was abandoned in the final regulations.

“I believe that whatever the DTI’s reasons for not giving charities a separate opt-back-in category, this situation is a miscarriage of justice,” says McGraw.

“I believe we have shown there was every intention by government to treat fundraising differently to telesales. The fundraising sector now needs to appeal against that decision,” he adds.

The agency is consulting with its clients and industry contacts on what next steps should be taken. These could include setting up a special interest lobbying group.

No one from the BIS was available for comment as Marketing Week went to press.

Yahoo has appointed OMD’s Matt James as sales director for the UK & Ireland. 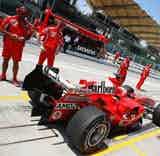 UPDATE – Formula 1 governing body the FIA is to issue legal proceedings against the eight tems who plan to form a breakaway championship next season.

Clear Channel has appointed William Eccleshare as president and chief executive of its international division.