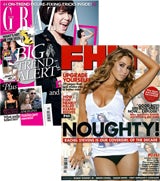 In another move, Richard Phillips has been appointed as head of digital sales.

The company says the changes will “simplify how the company operates in the multi-media marketplace and deal more effectively with the customers it serves”.

Formerly, Carvosso was the deputy managing director of Grazia and POP magazines and has lead the Grazia advertising team since the women’s glossy launched in 2005.

Previously, she led advertising sales teams in the glossy women’s market at titles including Elle, Red and New Woman.

In his new role, Phillips, will oversee 15 of Bauer’s media brands across their mobile and online platforms and join a team developing a strategy for websites and digital learning across the media group.

Paul Keenan, CEO of Bauer Media, says: “We believe now is the right time to invest senior resource to this role and bring a fresh focus to sales excellence, our clients and our creativity. Digital is a key part of our future business success and I am sure Richard will make an immediate positive impact.

Puma has unveiled a new kit for the African nation football teams it sponsors to raise awareness of environmental issues.

Brothers Cider has signed an exclusive deal with The O2 arena to become the official supplier of pear and flavoured ciders.