The iPlayer was visited by an average of 1.4 million people daily in May, matching its February figures, driven by the new series of Doctor Who and general election coverage.

The broadcaster revealed the average time spent watching TV programmes on the iPlayer was 73 minutes per person, while time spent listening to radio was 178 minutes.

In May 10% of requests were for live simulcast streams of TV shows.

In total the iPlayer received 130 million requests for programmes across all platforms and devices including Virgin Media TV in May, up from 123 million in April.

Weekly TV requests fell by 1.5 million to 16.8 million across May following the Election coverage, while radio requests dropped by 1.6 million to 6.3 million.

UKOM released its own VOD results earlier this week which reported 6.6 million people visiting the iPlayer in May. 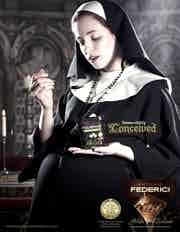 The Advertising Standards Authority has received a stream of complaints about an ad for Italian ice cream company Antonio Federici featuring a pregnant nun.