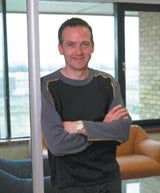 The BBC will embark on its biggest marketing campaign to date, if its bid to operate a digital terrestrial licence is accepted by the Independent Television Commission (ITC).

It will be the first time that the BBC promotes on-air a portfolio of channels including those of other broadcasters.

The corporation has teamed up with BSkyB and Crown Castle to form a consortium to deliver 29 free-to-air channels. Aside from the main terrestrial channels and the BBC’s own digital channels, the consortium would broadcast Sky News, CNN, UKTV’s planned UK History channel, in addition to a music channel and general entertainment channel that have yet to be finalised.

If the consortium gets the go-ahead on July 4, members will contribute funds to a combined marketing initiative, which will include in-store flyers to be used by retailers to support the sale of approved kite-marked digital set-top boxes.

BBC marketing and communications director Andy Duncan says: “In addition, the BBC will launch its biggest marketing campaign to date.”

DFGW and BBC Broadcast are both likely to work on the campaign.

The consortium will not use a brand name to promote the free-to-air proposition, preferring instead to use a description of the concept. Duncan claims that the BBC has registered rights to the name Freeview.

Duncan says if the consortium’s bid wins, it would welcome the addition of the entertainment channel – ITV Extra – which has been included in a rival bid by ITV and Channel 4.