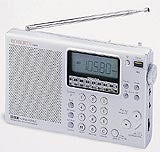 The BBC has struck a deal with manufacturer Roberts Radio to feature the BBC World Service brand name on products for the first time.

The agreement means the BBC World Service logo will be emblazoned on the new Roberts R9914 radio.

The logo will also appear on new editions of selected radios. No money changed hands between Roberts and BBC World Service.

She says Roberts Radio was chosen as a partner because international travellers buy the manufacturer’s sets to listen to the World Service: “Roberts is a well-established brand with high quality products which appeal to the people who listen to the station, so it’s a great fit.”

The R9914 radio, which retails at &£100, comes with stereo earphones and a free World Service frequency guide to shortwave radio, which gives details of the frequencies on which the station can be received in different countries.

The BBC World Service has a global radio audience of 151 million. It broadcasts in 43 languages and on FM in 117 capital cities. Its programming is based on international news.