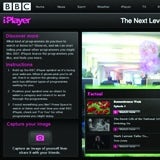 The activity, created by VML London, allows users to go ’into the world of iPlayer’.

Features include the chance to “virtually banter” with comedian Rufus Hound and bookmark.

The campaign comes two months after the BBC introduced the new version of the BBC iPlayer with added functionality and what it claimed was a simpler user interface.

A TV ad campaign promoting the newly improved service has been running since the September refresh.