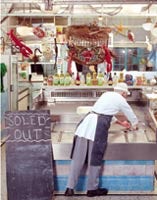 BBC Worldwide has linked up with the Seafish Authority to promote chef Rick Stein’s book Seafood on fishmongers’ bags. The tie-up was co-ordinated by BBC Worldwide’s agency, Flint, which has also created an ad to run in national newspaper weekend supplements from next week, featuring a fishmonger cleaning up his stall next to a ‘Soled out’ sign. Stuart Woodington, creative partner of Flint, says: “The BBC has to let supermarkets know which ingredients will feature in Delia Smith’s programme; it’s the same with fish stalls when Rick Stein does a show.” Media is bought and planned by PHD. Flint is the creative arm of the BLM Group.