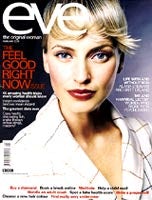 The February and March covers will appear in colour, reversing the launch marketing ploy of having black and white front pages.

BBC Worldwide could also follow the colour covers with a roll-out of alternating black and white and coloured covers.

Eve was launched with the strapline “The original woman”, with a target audience of late 20s and upwards.

The publisher of Eve, Justine Southall, says: “When we launched Eve, we wanted to produce a publication that would stand out in this competitive market.

“The two issues with coloured covers have similar style and imagery to those with black and white covers. In fact, they are very similar to our November black and white issue – our best selling issue.”

The launch issue of the magazine featured a model with smooth dark hair on the cover’s silver and grey background.

The February and the March issues of Eve both carry a health and beauty product covermount. According to Southall, this was another reason for having a coloured cover.

She says: “We shot the covers in both black and white and colour and found that the black and white cover was not as powerful. And we had always maintained, right from the launch that we will be flexible”.

Known initially as Project Urma, Eve, which is competing against EMAP’s Red and IPC’s Marie Claire, is thought to have a target circulation of 150,000 (MW June 2000).

The magazine has recently carried out reader-research.