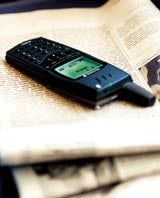 The move is a blow for Young &amp; Rubicam which has handled Ericsson’s business for almost six years. The account is worth &£9m in the UK alone.

The incumbent, Abbott Mead Vickers.BBDO and TBWA/London are all believed to have pitched for the business.

The review was overseen by Ericsson’s vice-president marketing and communications for consumer products, Jan Ahrenbring. The move is part of a strategy to place greater emphasis on the troubled consumer division’s mobile phone sector.

It is the second major account win for BBH in as many weeks. BBH headed a consortium of agencies to win the &£50 pan-European account for the launch of Microsoft’s gaming console Xbox (MW January 11).

Ericsson is thought to have been unhappy with Y&R’s most recent work which used the long-established brand message “Make Yourself Heard”.

Y&R was the first global agency to be appointed by the company. Last year, Ericsson appointed Publicis to help target the business market with a &£33m global ad campaign.

A spokeswoman for Ericsson refused to comment on the win because the company was in “purdah” while awaiting the announcement of its latest results at the end of the month.

Ericsson is the world’s third-largest mobile phone company, after Nokia and Motorola.