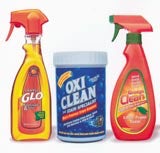 Orange Glo is tipped to hand its &£4m advertising business to Partners BDDH after a three-month search.

The US household goods company has been hunting for an agency to mastermind its UK push since it introduced its three-product cleaning range in February (MW February 13). The search was handled by the AAR.

Partners BDDH, which previously handled the Bounty account for Procter &amp; Gamble before the business was moved to Publicis, is said to have won the pitch against two other agencies.

An industry source says the advertising will be divided into sub-campaigns for each of the three Orange Glo products, rather than the brand as a whole. Orange Glo has so far launched the Oxiclean stain remover, the Orange Clean cleaner and the Orange Glo wood polish and cleaner in the UK. The company also manufactures hand-soap, shampoo, car polish and an ammonia-free cleaner called Kaboom in the US, with new products expected to launch on the Continent.

Orange Glo bases its products on the natural degreasing properties of citrus orange oil. The orange-based cleaning segment has grown over the past 12 months, with SC Johnson introducing Mr Muscle AllPurpose Orange Action in June 2002 and a Finish Orange dishwashing extension due out in May from Reckitt Benckiser. Own-brand manufacturers are also expected to launch cleaning products based on orange extracts.

A press advertisement for the British Heart Foundation (BHF) which featured a woman with a plastic bag over her head, was the most complained-about ad of last year, according to the Advertising Standards Authority’s (ASA) annual report. The ad, created by Abbott Mead Vickers.BBDO, triggered 315 complaints from people concerned it might encourage children to […]

GlaxoSmithKline has launched the Lucozade Sport Science Academy to bring together academics and athletes to ‘improve sporting performance through better nutrition’.