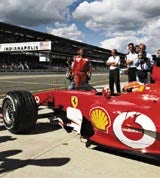 Formula One has been hit by a series of sponsorship losses in recent weeks that has left spectators wondering whether the sport has hit the skids. And with Ferrari’s Michael Schumacher just one point away from winning a record – but all too predictable – sixth drivers’ championship this weekend, F1’s attempts to reinvigorate itself seem far from complete.

According to data from Initiative Media, the global TV audience for F1 continued to slide during the first half of the season, although it has picked up again as the championship nears its conclusion.

Overall average ratings for this season have risen by one per cent on last season, with one race to go, but this nowhere near offsets the nine per cent drop suffered in 2002. It also masks a fall in viewing figures for nine of the 14 races.

Telecoms company Damovo is also said to be looking for an exit from its three-year deal with Jordan, a team currently without a title sponsor (MW September 4). Damovo could join a list of former F1 sponsors that includes Orange, Virgin Mobile and Mastercard.

The withdrawal of these companies highlights some of the weaknesses of F1 sponsorship. Travelex head of group marketing Anthony Wagerman says the decision to leave Toyota reflects a change in strategy, involving focusing on the North American market, where F1 is a less popular sport.

He says: “We had a short time to build our brand and F1 was the obvious way – it has the biggest global audience of any annual sport. The sponsorship was particularly helpful in Asia, but F1 isn’t going to do it for us in North America.”

With Canada axed from next year’s championship, because of the country’s ban on tobacco sponsorship, F1 is now of even less significance in the region.

Meanwhile, observers say Canon’s decision to shift its sponsorship budget towards its primary property, Euro 2004, reflects its desire to be associated with a “younger, sexier” sport. F1 is a sport that appeals most to older men, while the marketing industry has become obsessed with targeting the 15 to 25 age bracket.

Signage has also been shown to generate less brand awareness than car sponsorship – it is telling that Canon did not quit F1 altogether when it cancelled its sponsorship deal for perimeter fencing, remaining a partner of the McLaren F1 team.

“F1 is unbelievably boring,” says Argenti. “Everyone claims this season is better, but I think it has been indescribable. Monza was simply horrific.”

Argenti points out that a sport dominated by a single team will never be thrilling viewing – although at least this season BMW Williams is still in touch with Ferrari in the constructors’ championship. He asks: “Where’s the glamour, where’s the excitement? Why should sponsors put £10m into the sport when you know who is going to win every race?”

Even F1 boss Bernie Ecclestone, who has a number of interests in the sport, including stakes in TV rights holder Formula One Management and signage operator Allsport, has admitted the sport needs to become more entertaining. Changes to the qualifying process and the withdrawal of technological driving aids this year are only the beginning of the rethink; Ecclestone has now suggested that qualifying rounds should be moved to the same day as the main race to make the event more exciting.

Richard Davies, head of sponsorship at Initiative, says the changes have so far produced only a modest improvement. Davies says the value of the TV sponsorship rights has fallen since the £25m, four-year deal brokered by Toyota in 2001. The car company demanded a cash rebate from ITV last year after viewing figures disappointed (MW October 31, 2002).

But Davies maintains that the sport remains a sound sponsorship opportunity. “The audiences are still huge, and made more attractive as the sport is live. The period of stagnation reached its nadir last season, with the Ferrari domination but things look to be improving.”

Ben Pincus, chief executive of sports agency The Works, agrees that F1 is a valuable sponsorship property. There have been a number of sponsorship deals this year, notably by the BMW Williams team, which signed up GlaxoSmithKline’s Niquitin CQ and Budweiser over the summer (MW July 3).

Pincus highlights Vodafone, H-P and FedEx as brands that have successfully used F1 sponsorships in their marketing. “Many brands in F1 still think having their name on the cars is enough. It is not, of course: they will just get lost in the clutter.”

He adds the biggest challenge facing F1 is to attract packaged goods brands into a sport traditionally sponsored by technology companies and the tobacco industry.

No nicotine at the NÃ¼rburgring

That challenge is especially pressing as tobacco’s involvement in F1 is coming under increasing pressure from the advertising bans being introduced around the world, including an EU sponsorship ban that comes into force in 2006. Outside the packaged goods industry, says Pincus, a decreasing number of brands have the global reach to justify an F1 sponsorship.

He says: “Tobacco won’t go – F1 is already shifting races to Bahrain and Shanghai, and away from places such as Canada, for tobacco reasons.”

However, he warns that F1 might become less attractive to Western brands if teams race outside Europe, or with different sponsors for certain races, in order to circumvent local bans.

But as one door closes, another opens. One area of lucrative future sponsorship, says BMW Williams marketing director Jim Wright, will be the Asian market, when tracks open in the region next year.

Tobacco problems aside, Wright says, the sport is as strong as it has ever been: “There is more money coming into F1 than going out. Our ratecard is very strong and I’ve heard no reported drop in other teams’ ratecards.”

Wright admits the sponsorship environment has become more challenging, however. He warns that not all teams have the necessary marketing skills.

This need underpinned Sauber’s decision to appoint its first advertising agency, McCann-Erickson, in July. Marketing director Sven Zehnder says that part of the brief was to build Sauber into a global brand, which will make its sponsorships worth more.

He says: “We want to be perceived as more than a Swiss brand – we want to be an international brand. A global position will offer more to our partners, and add value to their sponsorship.”

That F1 might soon be feeling the competition from other sports would have been unthinkable a few years ago, when companies were queuing to secure a place on a car. Alistair McDonald, managing director of sports agency Connexus, says there are still signs of arrogance in F1.

He says: “I don’t think people in F1 have much awareness of their brands. They need to work harder to persuade people, and not all the teams are doing that yet.”

Teams are competing as much against each other as against other sports. Vodafone was being pursued by Ferrari, McLaren, Jordan and Renault, before eventually picking the prancing horse. McLaren is believed to have been prepared to drop its tobacco sponsor and repaint its silver cars in Vodafone red.

The smaller teams are struggling most. Jordan is still without a title sponsor after Benson &amp; Hedges downgraded its £10m deal in 2002. Eddie Jordan’s humiliating court case against Vodafone is widely believed to have degraded the team’s stock further.

The team has now turned to reality TV. Jordan has agreed to let a TV show winner race its car, clearly a move not wholly motivated by attempts to compete on the track.

If Wolverhampton Wanderers football team agreed to field a TV-chosen side in a Premiership game, it would be seen as an insult to the sport, so it is testament to Jordan’s skills that the team has been applauded for its ingenuity.

Last week, F1’s governing body, the FÃ©dÃ©ration Internationale de l’Automobile (FIA), even debated whether to allow the richer teams to field a third car to fill the racing grid should cash-strapped teams such as Jordan or Minardi collapse.

This, says Davies, would be a disaster. He says the FIA should make races cheaper to enter and easier to compete in, rather than creating an even smaller elite of dominant teams. He adds there is still talk among car manufacturers of a breakaway rival series.

“The Prost and Arrows teams have already been pushed out by the sheer cost of F1. The sport needs to lower the bar at the lower end to bring in more teams and more competition,” says Davies.

There are signs that F1 is heeding the warning signs. The team principals have met three times in the past two weeks to debate the future of F1, an indication that there is much to discuss.

While the spectators remain interested for the time being, the sport needs to fundamentally improve the racing rules to restore the excitement of watching very fast cars driven by very courageous drivers. If teams ignore the fans’ need for thrills, we may see more large sponsors walking away from the track, and more teams being forced out of the sport.